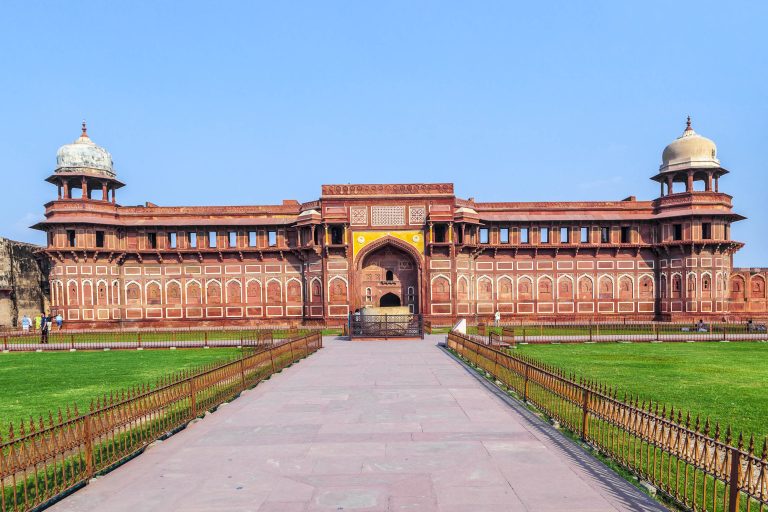 An architectural masterpiece, The Red Fort of Agra or Agra Fort was built by Emperor Akbar in 1573. It is located on the right bank of the River Yamuna and is made entirely of red sandstone. The historical fort was once the ersthwhile residence of the Mughals until 1638. One of the UNESCO World Heritage Sites, it lies 2.5 kilometres from Taj Mahal.

Also known as Lal –Qila, Fort Rouge or Qila-i-Akbari, Agra Fort is a symbol of Agra and is so massive that it is often referred to as a walled city. It is the perfect example of Mughal art and architecture, built purely out of red sandstone. Within the premises of Agra Fort lie the most exquisite structures like the Pearl Mosque, Diwan-i I Khas, Diwan-i I Aam, Moti Masjid and Jahangiri Mahal. Some part of the Agra Fort is used by the Indian Army is off-limit to public access. View of Yamuna River and Taj Mahal from the fort’s pavilions is mind-stirring.

1.  Jehangir Mahal: One of the first architectures that you will encounter once you enter the Agra Fort through the Amar Singh Gate is the Jehangir Mahal. Jehangir was Akbar’s son and the next in line to rule the Mughal empire after his father. The Jehangir Mahal was built by Akbar as a women’s quarters and was constructed adjacent to the chambers of his favourite queen Jodha Bai. Simple in its design, the Jehangir Mahal is built in stone and has Persian verses carved out beautifully in a large stone bowl used for storing rose water.
2. Khas Mahal: Another important structure in the Agra Fort is the Khas Mahal, which has some classical Persian and Islamic influences with a touch of Hindu motifs in its construction. It was the emperor’s sleeping chambers or ‘Araamgah’. Its unique feature is its beautiful paintings on the marble surface.
3. Musamman Burj: Towards the left of the Khas Mahal lies the Musamman Burj, which was also built by Shah Jahan. Octagonal in shape, this tower has an open pavilion which allowed the cool evening breeze to flow right through it. This was the place where Shah Jahan spent his last days whilst he looked out over to to the tomb of his beloved wife, the Taj Mahal.
4. Sheesh Mahal: One of the most exquisite constructions in the Agra Fort, the Sheesh Mahal is a ‘harem’ or dressing room that employs the most sophisticated water engineering designs. The inside of this construction is beautifully decorated with a mosaic of myriad tiny mirrors, hence giving it its name.
5. Diwan – I- Khaas:  To the right of the Sheesh Mahal lies the Diwan – I – Khaas, which was a hall especially for private audiences. It is intricately decorated with marble pillars that are studded with floral patterns of semi – precious stones. Adjacent to this is the Mammam-E-Shahi or the Shah Burj, used as the summer retreat.
6. Diwan – E – Am: This was the hall that was open to the general public. It was here that the very famous Peacock Throne was situated, and the room where the throne once used to be is richly decorated with white marble.
7. Nagina Masjid: This shrine was built by emperor Shah Jahan as a private mosque for the ladies of the court.
8. Moti Masjid: Also known as the Pearl Mosque, it is an extremely beautiful structure situated at Agra Fort. The building of the mosque is closed to visitors as of now. Near the Moti Masjid lies the Mina Masjid, which was the private shrine of Emperor Shah Jahan.